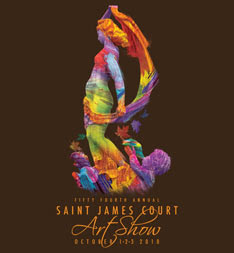 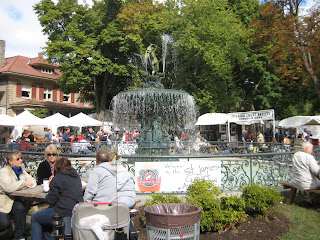 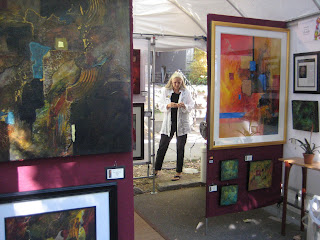 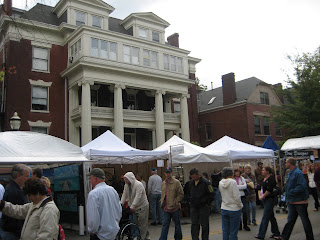 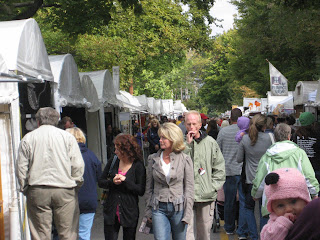 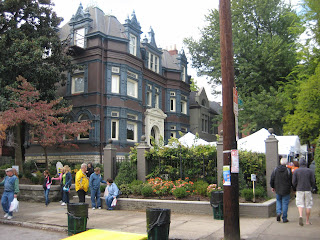 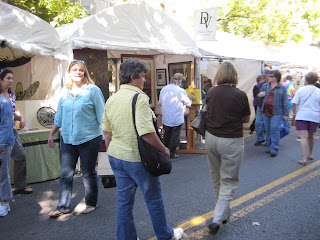 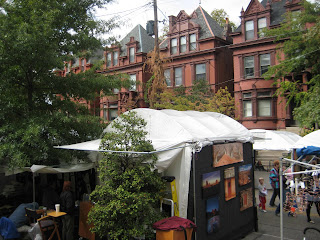 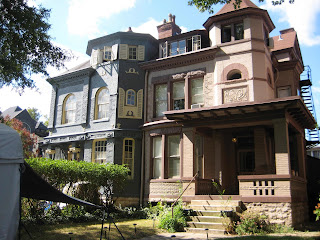 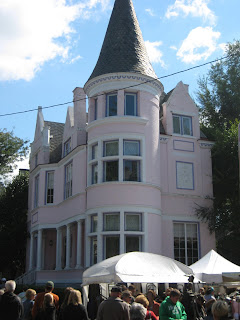 What an experience !! The St. James Court Art Show lived up to its reputation as being the No. 1 open air art show in the country. The Old Louisville section of Louisville, KY was converted into a three day fine art show featuring 750 + artists from all over the country. The show was spread out over a several block residential neighborhood of the most beautiful homes and mansions that I have ever seen. Each home and garden was more beautiful than the next. We were set up right in their front yards or on the sidewalks and lawns near the street. This was the most impressive art show that I have ever been involved in or that I have ever been to.

As you can imagine, parking was a nightmare but it worked out as I found a nice church parking lot for the three days. The show was actually several shows in one, similar to Ann Arbor, in which each neighborhood had their own set of helpers, volunteers, judges, jury, hosts etc. All the neighborhoods together call themselves the St. James Court Art Show.

I was set up on a beautiful tree lined street called 4th street in front of an impressive three story brick mansion under an old maple tree. There were artists booths on both sides of the street and a street full of art shoppers for three days. At times, there were so many people that the crowd just seemed to stop as they seemed to be unable to move in either direction. Each artist was asigned a host couple that treated us like honored guests. We were given breakfast in the mornings...on Sat. we were asked to have breakfast at one of the residences. We were provided with box lunches and snacks during the day and on Sat. evening we were invited to a wine and appetizer get together for the artists.
During the show, when there was room, I would set up and easel and paint in front of my booth. That was fun and seemed to attract a lot of interest. In fact, I sold two of the paintings right off the easel to a cute couple who paid me before they were finished and came back the next day to pick them up. I also traded one of the paintings that I was working on to an artist across the street who said she loved watching the painting come to life during the day. She makes amazing artsy purses. Now Gail has one of her creations and she has one of my paintings to decorate her home in Florida.
All in all it was a great experience that I won't soon forget. I plan to return next year if I'm accepted again and will be looking forward to exploring other parts of beautiful Louisville,KY. It's a very difficult time to try to make money at selling art. Most of the artists I've talked to are having record low sales this year. Several have said that this year's sales are down as much as 90% from past years. For me, I tell myself often that I must savor the experience... the travel to new and beautiful places, the meeting of new friends and interesting creative people, the amazing art. I have to separate the experience from the sales. Last weekends experience was amazing... the sales were just OK...just enough to meet my expenses for the weekend.....that being said, I came home much richer from St. James Court.

Oh, BTW... on Monday we came home by taking a little side trip down "The Bourbon Trail". We visited several Kentucky Bourbon factories such as Makers Mark, Jim Beam, and Wild Turkey. Beautiful country and what fun...each of these places gave tours and Bourbon tastings !!!
Posted by Joe Martino at 3:54 PM 1 comment:

Joe Martino
I have exhibited my art work at many art shows, art festivals and galleries and I have been the featured artist at many local art events. My undergraduate training was in premed and the sciences; however, I have been a student of the arts my whole life. *****I have studied with several nationally known artists and have been a successful professional artist for many years. Check out my events page on my web site for the current list of juried shows. *****As a retired teacher of chemistry, anatomy, and marine biology, I am an artist at heart and am greatly influenced by science and nature.